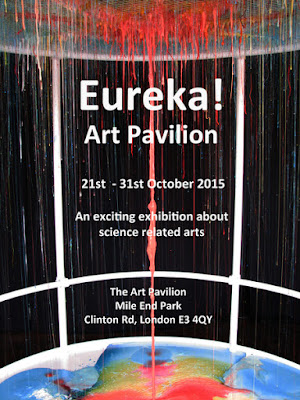 Eureka! Art Pavilion is the final group exhibition of the Osmosis Machine tour which is a kinetic glooping tower installation which evolves and grows into colourful patterns and stalactite formations. The critically acclaimed art work received the visitors choice award for "The Neo Art Prize 2013" and since then "Osmosis Machine" has toured extensively from the Newcastle "Centre for Life Museum" to "The Newlyn & Exchange Gallery" Cornwall.

The exhibition should be especially appealing to young people and families with its exciting use of colour, motion and sound to stimulate interest in science, discovery and the Arts and includes free gloop-making workshops (see below).

The exhibition runs 10-5 daily from the 21-31st October in the Art Pavilion, which encompasses Tower Hamlets' half term.

Eureka! Art Pavilion is a coming together of many arts and science enthusiasts. All the artists’ works are inspired by science and discovery in some way and between them deal with or suggest fundamental physics, liquids, kinetic energy, sound frequencies and light waves.

The Exhibition will have a festival feel with a focus on making the arts and sciences more accessible to families and encouraging young people into science, engineering and the arts.

The work comes from diverse backgrounds and disciplines and includes award winning artists Grenville Davey winner of the 1992 Turner Prize and Virginia Verran winner of the Jerwood Drawing Prize 2010. The show also celebrates up and coming artists like Zoe Schoenherr the Leverhulme Trust Artist-in-Residence 2015 based at UCL engineering. Other cross disciplinary engineering based artists include Tom Wilkinson, Samuel Zealey and Tine Bech.

2015 also sees the UNESCO International year of Light which is a global initiative which highlights the importance of light and optical technologies in the lives and futures of developed societies. As part of this celebration Eureka! has invited David Medalla to make a new version of his famous interactive piece entitled 'THE COSMIC TYPEWRITER : homage to dsh',

A launch event will contain music and projections followed by two days worth of workshops and an open discussion debate with Physicists from Queen Mary School of Physics and Astronomy.

The exhibition and workshops will be held at "The Art Pavilion" which is a deluxe arts centre set amongst a green park close to Mile End tube station and which is owned and managed by Tower Hamlets Council. 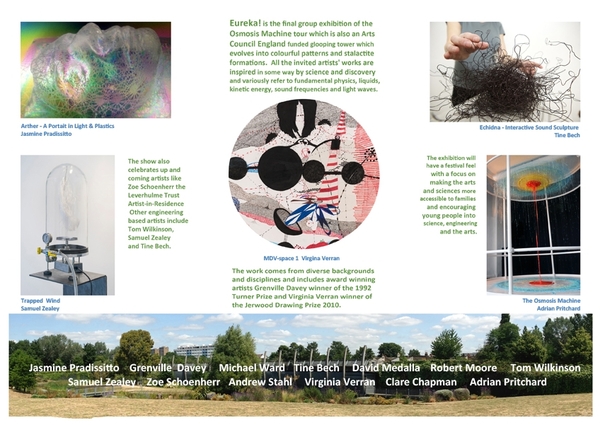